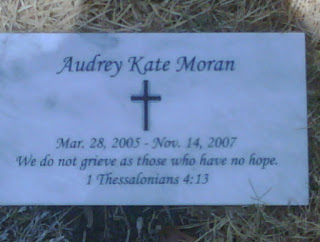 Last week, my daughter Mary Claire (6) and I were reading a picture book called Alice the Fairy by David Shannon. In it, little Alice wields magical powers as she pretends to be a fairy, though she admits she is only a "temporary fairy". "Permanent fairies", she says, must "pass a lot of tests".

"Temporary," I replied, "means that something doesn't last forever."

This Saturday is the second anniversary of our daughter Audrey's death. We have chosen to call it her "heavenly birthday", as we feel this more accurately reflects God's (and Audrey's) perspective on the day. Our recognition of Audrey's "heavenly birthday" is likely to include a visit to the gravesite, though I admit ambivalent feelings about it.

For a year and a half I agonized over what to put on Audrey's grave marker. I wanted it to be different, to make a statement of hope that was uncommon. And, I couldn't make up my mind. Not getting a marker on Audrey's grave has been a tremendous source of guilt. After expressing this to an unsuspecting man at the funeral home this summer, I learned that we could have gotten a free temporary marker in the very beginning. Saddened and yet relieved, I quickly ordered one. It's simple, and I like it. I'm probably going to order a permanent one similar to it. But, something keeps holding me back. I just can't do it. It's the one way I have not "dealt" with her death. What's my issue, I wondered?

That's when Alice the Fairy came to mind. "Temporary," she whispered in my ear.

It was one of those "ah-ha" moments. Something about a "real" marker seems final. And, I know in the depths of my heart that that grave is not the final word on Audrey's life. It is only fitting: a temporary marker for a temporary grave.

I may just leave that temporary marker there...permanently.

"Therefore we do not lose heart. Though outwardly we are wasting away, yet inwardly we are being renewed day by day. For our light and momentary troubles are acheiving for us an eternal glory that far outweighs them all. So we fix our eyes not on what is seen, but on what is unseen. For what is seen is temporary, but what is unseen is eternal." 2 Corinthians 4:16-18
Posted by Sarah Moran at 11:40 AM

Proud of you, honey. Thanks for sharing your wisdom and insight with the virtual world. :) Love you -

Thank you my friend for your constant reminders of Hope, praying us both through this week! Love you, S

For those that find doubt that God is at work in their own lives there can be no shadow of a doubt that God is doing a great work in yours. This is the encouragement you can bring others even though it’s not the path you would have chosen. Lead on, sister.

Psalm 3:3-4
But thou, O LORD, art a shield for me; my glory, and the lifter up of my head. I cried unto the LORD with my voice, and he heard me out of his holy hill.

Pain and Peace can coexist...you don't have to get rid of the one to get the other. The Lord knows your heart and based on the TRUTH He gives there is peace. Your words above are beautiful! Thank you for sharing out of your pain the Peace the Lord has given. Matthew 5:4 "Blessed are those who mourn, for they shall be comforted". May we live with a temporal mindset...for our permanent residence is in heaven! I praise the Lord for the Hope you and your family have! Blessings!

I love you Sarah Moran and I am profoundly blessed to have you as a friend.
I know that you don't like the whole cyberworld idea, but I truly believe that God will use your words
to shine a voice of light into the darkness of this earthly world.Know that I believe in you and in what God is
doing through your obedience to Him!

Thank you for sharing. Many will blessed and encouraged by your words.

Love this! And I love your heart, Sarah! God is going to do mighty things! Real-ness and transparency is where God loves to dwell. Love you!

very cool. glad you started it :)

Thank you Sarah! I look forward to continuing to read your words. We all appreciate your Hope & Faith and the realness that you share. You have an amazing heart, and it is wonderful to hear what God speaks through you.

I love this... I look forward to following you in this journey of writing. God has truly gifted you, we are blessed to call you friend.

I am Lana's twin sister, Lisa. She let me know that you have a blog. I thank you for sharing this extremely personal thought with us. Having NO way to truly understand your feeling our your loss, I can only say, I know people will be touched by your words, as I have been.

Thanx so much for sharing, this really touched me.

I am sure you are having a bittersweet day today...I understand because I too lost my daughter to a tragic accident. Her name was Mallory and she was 13 months old. It has been 2 years for me as well since she left to be with God and his angels. I would love to visit with you sometime.....I don't know many people in our shoes! I am praying for your family to have a sense of peace today! Your family is beautiful!

Sarah it is for reasons we can't understand that God uses us. I am so glad you and Bryan have that close walk with the Lord. I pray that your lights will shine in many others as they see the faith and love in Jesus Christ that you have.