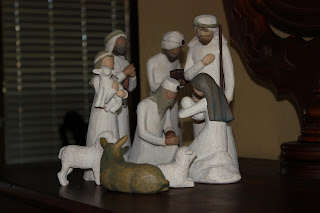 Is there anybody out there who wants to be child-centered at the holidays but battles their inner Martha Stewart?! It’s like I have an angel on one shoulder and the devil on the other. Their conversation goes something like this:

Angel: “Oh, look at how lovely it is to see you and your family decorating your tree together! The kids are getting big enough to help out. They love to open the boxes, discover forgotten ornaments, and reminisce about who made them. It is just heart-warming.”

Devil: “Yeah, but the kids keep hanging several ornaments in one place and weighing down the branches. You should just move them when they are not looking. It won’t hurt their feelings if they don’t see you do it!”

Ugh. It is embarrassing, but it is true. Every Christmas, I desire to be a mom who is more about the process than the outcome, but the frustrated interior decorator in me fights back. Everyone else seems to be having a good time, but inside of me, it is all-out war!

We have a new nativity set that was given to us by my parents last year. A few weeks ago, the kids unwrapped the figurines and marveled over them one by one. Later, I placed them on the chest of drawers at the bottom of our stairs so that we could see them often and enjoy them throughout the season.

The next day, I noticed that the wise men had meandered a bit. The shepherds and the animals had also journeyed across the credenza. The kids had obviously been playing with them. I tried to resist the OCD urge, but it got the better of me…I stopped and took the time to tediously rearrange the figurines the way I thought they should look. I made sure they were properly aligned and that they took up the whole space…you know, like it would look in an ad in a magazine. Pleased with my work, I went on with my day and forgot about it.

But, try as I may to keep order, I keep finding those silly people repositioned when I’m not looking. Every time I rearrange them, I turn around and find the whole crew crowded up around the baby.

And, I know why! When my kids picture the story of Jesus’ birth, they imagine that everyone wanted to get a good look at the baby. They suspect that whoever was there wanted to get right up in Jesus’ grill. Of course, they did!

My kids really got me thinking about my preconceived idea of that manger scene. Do I really think that those shepherds who saw angels were really going to come find the Messiah and then just hang back as if they were onlookers at a golf tournament? Polite clapping, anyone? I don’t think so! The Bible reports that the shepherds said, “Let’s go straight to Bethlehem to see what has happened, which the Lord has made known to us.” (Luke 2:15b) Then, it states, “They hurried off and found both Mary and Joseph, and the baby who was lying in the feeding trough.” (Luke 2:16) They were excited! They were in a hurry! They made a beeline for the baby! And, I bet they wanted to see what had happened up close and personal.

What about those wise men? Now, the Bible says they didn’t arrive until Jesus was a toddler, so placing them in the nativity scene is all wrong, but we can still imagine that once they got there, they didn’t hang back. Matthew’s gospel tells us that the wise men came to see Jesus for one purpose: to worship Him! Even if they reverently brought their gifts and laid them at His feet, do you really think they stayed at an arm’s length? They were looking for the star long before it appeared, and they traveled a long way to see the fulfillment of the prophecy. Don’t you imagine they wanted to touch the baby? Don’t you imagine they wanted to see if all of this that was prophesied was real?

I think my girls have the right idea. I told Bryan about the way they kept repositioning the figurines. That night, he came downstairs from tucking them into bed and reported that the nativity scene upstairs was in the same condition. It makes me smile from ear to ear. How can we hear from God if we are not willing to draw near to Him? I want to be close enough to read His lips!

Years after Jesus’ birth, when children were trying to get close to Him, His disciples corrected them, but Jesus replied, “Let the little children come to me, for such as theirs is the kingdom of Heaven.” (Matthew 19:14, Mark 10:14, Luke 18:16) Three of the four gospels tell this story. The message must have needed repeating. Jesus was saying that unless we are willing to crawl up into his lap like little children, we will not inherit the kingdom of God. We will not be able to receive all he has for us unless we are willing to draw near like children do.

Psalm 84:3,10 says, “Even the sparrow has found a home, and the swallow a nest for herself, where she may have her young—a place near your altar, Lord Almighty, my King and my God…better is one day in your courts than a thousand elsewhere.” If little children and even the birds find their home in the presence of the Lord, then so should I.

Oh, God, draw me closer! Pull me in! Show me who you are! Help me reposition myself so that I can receive all you have to give me.

The crowd at the manger remains on my credenza. There is not a breath between them. There is no order. In fact it is outright chaos. They are elbowing each other trying to see who is going to get a closer look. I think the baby likes it.
Posted by Sarah Moran at 11:49 AM

Love it and I can totally identify! -Viki

Sarah--you have a gift. So good to see you are using it to glorify Him! He delights in you as you delight in Him!!